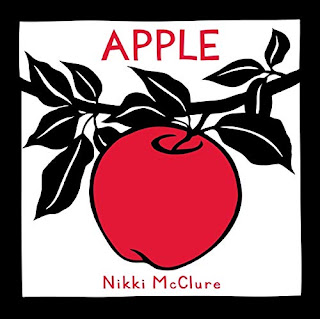 Nikki McClure’s paper cut illustrations hold all the beautiful simplicity of the life of an apple. Each page contains a one word explanation of the apple’s journey from apple to snack to compost to seedling. The book begins with an apple falling from a tree and follows its travels and eventual return to the earth. The fallen apple is picked up and taken home where it was about to be prepared as an apple dish, but a little girl sneaks the apple and takes it to school as a snack.


The illustrations are black and white paper cuts colored with red accents to draw attention to the apple on each page.  This charming book captures the attention of child and adult alike. It's a perfect introduction to the seasons of a fruit tree. The book also includes an explanation of how composting works on the last page.

Lia (age 4) says she liked that “she sneaked up and took the apple and put it in her backpack and her backpack was her red secret.”
Posted by Jess Challis at 10:09 PM